The latest results are in! Rent increase in Germany, country tax updates, and more!

Need a snapshot of expatriate-quality rental markets around the world?

Germany [RISING]
In some rental markets, it is common practice for certain utility costs to be included in rent. In Germany, nebenkosten may include maintenance for shared areas, elevators, water, and heating. Due to the rising cost of utilities, the increased nebenkosten resulted in higher rents for apartments this update. In addition, a lack of supply versus demand in major cities like Frankfurt, Hamburg, Mainz, and Munich also contributed to rent increases.

Kazakhstan [RISING]
Another location with relatively easier access to Russians, Kazakhstan has become a destination for those avoiding the military mobilization in Russia. This increased demand has raised rents across the country. In other news, after several years as Nur-Sultan, the name of the Kazakh capital is Astana again.

What are Worldwide Goods and Services Inflation rates?
Selected locations with inflation higher than 5% for 6 months: 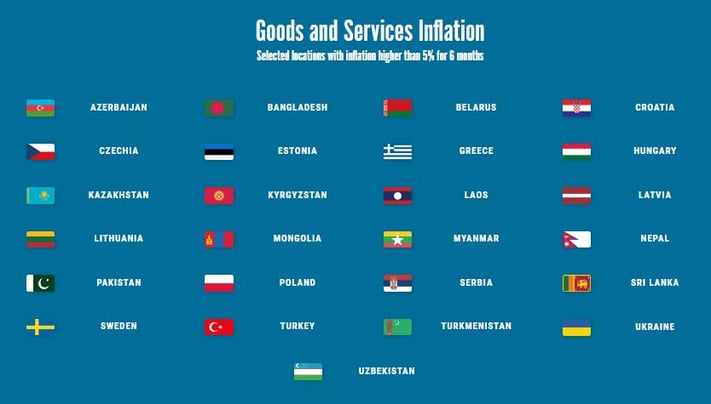 What are the recent changes in expatriate tax?

Myanmar
The Myanmar tax year changed to begin on April 1st (previously October 1st). For the 2022/2023 tax year, the tax brackets were widened. The top marginal tax rate remains at 25%, applicable to taxable incomes exceeding MMK 70,000,000. Personal allowances are unchanged. Social security contribution rates are unchanged. The net effect of these changes is a decrease in tax for all taxpayers.

United Kingdom
UPDATE as of November 6, 2022: The contribution rates for National Insurance Contributions (social security) in both Scotland and the United Kingdom decreased by 1.25% for both employees and employers. The reduction was announced as part of the UK government's Growth Plan and reverses increases implemented in April. The net effect of this mid-year change is a small decrease in social security for all taxpayers. Income tax for the 2022/2023 tax year is unchanged.

Read more from our blog AIRSHARE:

Patrick joined AIRINC as a cost-of-living researcher in 2003 and has traveled to over 70 countries. He maintains AIRINC's Location Profiles product, produces AIRINC’s quarterly data newsletter “Data Points,” and works with the AIRShare Blog Team. After years co-managing the Housing Team, Patrick most recently joined the Research Team as Senior International Research Manager.