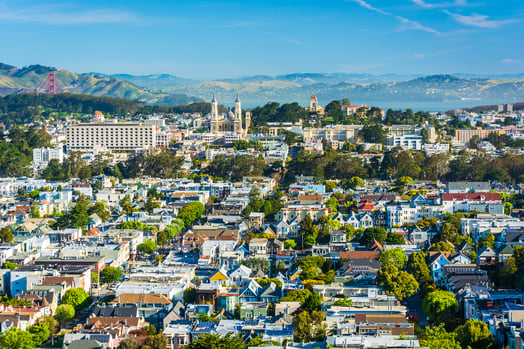 Like other urban cities across the United States, San Francisco’s rental market took a big hit as many people in the tech hub changed their residence during the work-from-home policies of the pandemic. Unlike New York City and Boston on the East Coast, the West Coast city’s market hasn’t experienced the quick recovery that was expected after vaccination rollouts.

Increasing Demand and Return of Renters

Recently, the city's overall demand for rentals is beginning to rise. There has been a dramatic decline in the number of individuals departing San Francisco, and more people are returning. In addition, many new workers are entering the workforce, which is driving up rental demand. Rents stopped falling in the latter part of 2021 and plateaued over the winter months. Rental costs have been gradually increasing since mid-February.

Sources said popular districts on San Francisco's northside, such as Pacific Heights, Nob Hill, the Marina District, and Inner Sunset, have seen continuous demand. Since the pandemic, neighboring areas such as South of Market (SOMA) and other portions of San Francisco's southside have seen less demand. The smaller housing in these neighborhoods, which typically accommodates young graduates new to the workforce, has yet to see recovery in demand. According to sources, space has become quite precious, and many executives have opted to upgrade to larger units in secure and desirable districts. Larger units with stronger demand experienced higher rent increases than smaller units. Due to a scarcity of homes, the rent has become costly.

For tenants searching for bigger single-family houses with lower rents than in the city, the suburbs of San Francisco, such as San Mateo, were and still are quite popular. In 2021, the San Mateo rental market had a significant increase in rent. With more people returning to the city, the market may alter in the coming years, with rents rising in San Francisco and falling in the suburbs.

According to one article, San Francisco legislators are considering a vacancy tax on residential housing units due to the housing shortage and high vacancy rates. This tax, which is currently being petitioned to enter the November 2022 ballot, is intended to encourage landlords to rent out housing that has been vacant for more than 6 months. Similar vacancy taxes are in effect in Oakland, CA and Vancouver, BC, Canada.

As we approach summer 2022, the market will likely continue to rise. Sources predict a surge in demand and costs because of the backlog of individuals looking to return to the city when offices open up. However, sources don’t expect rents to return to pre-pandemic levels anytime soon.

Need more information on any housing trends across the world?

Gianna grew up in Ulster County, New York and lives in Boston, Massachusetts. She joined AIRINC in 2022 as a Research Analyst and has researched housing markets and goods and services inflation in North America and Europe.