How is Tax Policy used to combat inflation and cost of living?

Considering the conversations in the news recently about wage growth and how to respond to the rising cost of living, I thought I would discuss a favorite tax ‘reward’ - more net take home pay. With inflation and the cost of living, everyone is looking for ways to stretch their money.

Tax authorities also are looking for ways to help taxpayers. There have been many tax proposals recently to help reduce tax costs to offset the increasing cost of basic goods, rising energy costs, and putting more money in the pockets of individuals after-tax.

Some of these tax changes are permanent, while others are used as a temporary waiver or tax reduction to address current conditions. A typical example of a permanent tax change is inflation-indexing to fix “Bracket Creep” or “Fiscal Drag”. What is bracket creep you ask?

As wages are typically adjusted annually for cost-of-living increases, the employee makes more money from one year to the next. But they are also paying for goods and services at higher prices this year compared to last year from their net take home pay, so they are not better off with the salary increase.

However, in a progressive tax system, the employee is making more taxable income and is potentially pushed into higher tax brackets and paying taxes at higher tax rates. With inflation-indexing, the brackets of income are annually adjusted higher for inflation. This theoretically results in the employee paying about the same tax burden as last year.

Canada
Here is an example of how Canada adjusted the national tax brackets for inflation for 2022. This reflects an indexation factor of 1.024 to the brackets (a 2.4% increase) while the tax rates are still unchanged. The net effect of the change is more income in 2022 is taxed at the lower rates of tax compared to 2021 and a taxpayer with income subject to the highest rate of tax saved a little over CAD 500 because of the inflation adjustment. 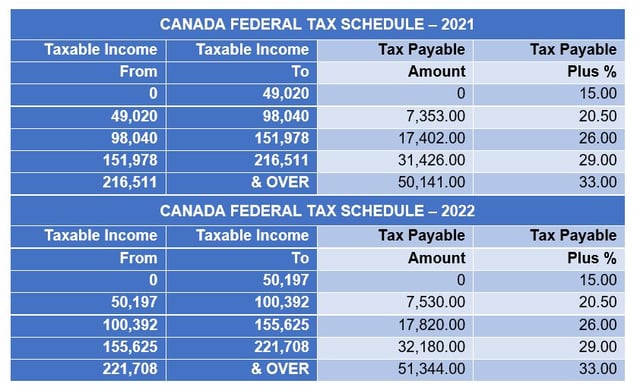 Let’s take a quick look at other examples of how tax policy is used to combat inflation.

Austria
In Austria, the government announced a tax relief package to help offset high inflation and specifically the inflated cost of energy prices. Individuals will receive one-time payments called a climate bonus equal to EUR 250 per person and EUR 125 for dependent children. Other changes in Austria include an expanded family tax credit of EUR 2,000 per dependent child that is retroactive to January 1, 2022. They also are committing to inflation-adjusting the Austrian tax brackets beginning from 2023. Historically Austria did not adjust the tax brackets for inflation.

United Kingdom
In the U.K., the second phase of the United Kingdom’s implementation of the Health and Social Services Levy comes into effect as of July 6, 2022. The basic exemption for National Insurance Contributions (NIC), known as the Primary Threshold, is increasing from GBP 9,880 to GBP 12,570.

The Primary Threshold will now match the basic personal allowance used for income tax purposes. Today’s change will save the typical employee about GBP 330 on an annualized basis. Again, a small tax cut to help taxpayers. Remember though that the basic NIC rate increased 1.25% for both employees and employers beginning April 6, 2022. This increase in the Primary Threshold may not be felt by most UK employees.

Consumption Tax Changes
Other tax changes targeting inflation and cost of living focus on consumption rather than income tax and these often are temporary in nature.

President Biden last month proposed temporary waiver of the federal gas tax for 3 months. This would mean drivers would save 18.3 cents per gallon of gasoline. Biden will need congressional action for this suspension to take effect and there are concerns within Congress about what this suspension may mean for funding of highway projects.

Other examples include Ontario’s cut to the gas tax rate for six months. Last week, Netherlands cut VAT (Value Added Tax) rates on electricity from 21% to 9%, and a 21% reduction on excise duties on petrol and diesel. The state of Illinois is suspending its 1% sales tax on groceries for a year, beginning July 1, 2022.

We can expect more tax change proposals to address inflation and higher cost of living this Fall. We will continue to monitor any changes and update you.

Read more from our blog AIRSHARE:

Whitepaper: Developmental Assignments & the Importance of Knowing your Audience

What are the relativities of remote work across the world?

Director, Global Tax Research and Consulting Pat joined AIRINC in 2006, and directs AIRINC’s research and statistical analyses of international tax policies and supervises the production of our hypothetical personal income tax products. He is responsible for the international income tax guide and tax calculator products at AIRINC and consults with clients on tax equalization policy matters. Pat has 32 years of experience in the area of expatriate taxation and global mobility consulting. Prior to joining AIRINC, he spent 18 years with PricewaterhouseCoopers’ International Assignment Services practice, providing tax compliance and consulting services to multinational companies and their assignee employees. He received his B.S. in Business Administration (Accounting) from the University of Colorado. Pat is a Certified Public Accountant and a member of the AICPA and MSCPA societies.