What were the Worst & Best Currency Performers in July? 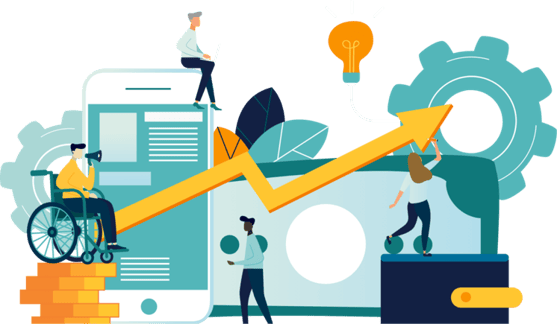 This month’s currencies were affected by a wide variety of reasons. Domestically, many currencies suffered due to growing account deficits and election results.

Internationally, inflation and the conflict in Ukraine continue to negatively impact many currencies excluding a few such as the Tajikistani somoni and Belarusian ruble. Chile and the price of copper and South Africa with their electric distribution are among the outliers of reasons behind currency movements. 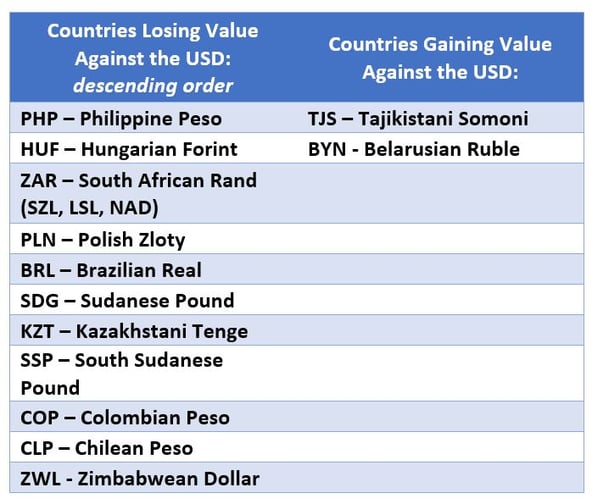 The peso decreased when the Central Bank did not increase interest rates. The Federal Bank of the United States is still pushing interest rates higher causing the value of the dollar to rise whereas the Central Bank of the Philippines has maintained its rate at the same level. With the increase of the dollar, the purchasing power of the Philippine citizens decreased.

The forint is struggling after election spending negatively affected Hungary’s account deficit. Hungary’s central bank raised the benchmark interest rate, but this has not softened the forint’s fall. With fears of a recession and a possible energy crisis, many investors are seeking safer investments and selling currencies such as the forint.

South Africa’s currency suffered due to rolling blackouts known as load shedding. Eskom Holding’s blackouts strained the economy further after the floods that occurred in previous months. The blackouts also impacted productivity, specifically the mining and manufacturing sectors. The Lesotho loti, Swazi lilangeni, and Namibian dollar are all pegged to the South African rand and are also affected.

The zloty depreciated another consecutive month because of the ongoing conflict in Ukraine due to the country’s proximity to Ukraine and Belarus. Poland will look to increase rates for the 10th consecutive month to combat inflation and prevent economic slowdown.

Investors have turned away from the Brazilian real after the Brazilian Congress approved a major spending bill for their upcoming elections. President Jair Bolsonaro is expecting this bill will give him an advantage for re-election. The spending may increase inflation and hurt the exchange rate in the future, so some investors think it shows a lack of discipline from the Brazilian government since the government will be spending money on elections instead of helping its people with high inflation and rising cost of living.

Creditors have finally reacted to the military coup that occurred in October of last year. The Paris Club, a group of countries that had loaned money to the government, has cancelled any talks of restructuring Sudan’s debt.

The tenge decreased due to rising inflation and slow economic growth. The Central Bank increased the interest rate 0.5% to stabilize the currency and to benefit long-term economic growth.

The Bank of South Sudan auctioned about 10 million U.S. dollars to commercial banks to try to stabilize its currency and inflation. The Central Bank warned the country’s people that the currency will most likely keep depreciating due to external economic factors, primarily the Russian-Ukraine conflict. Although South Sudan has benefited from rising oil prices, they still pay a premium to neighboring countries for refined petroleum products, impacting their trade account balance.

On June 19th, Gustavo Petro won the presidential election in Colombia and the peso negatively reacted shortly thereafter. Stocks on the domestic stock exchange fell in the following days signaling a lack of confidence for the new president. One of the market’s concerns is Petro’s push for “greener” solutions, which may jeopardize established oil companies in the country. The Colombian Central Bank increased the interest rate 150 basis points to 7.5% following these developments.

The rising USD and weakening copper prices damaged the peso severely this month. The Central Bank will not raise interest rates since they claim that market conditions have remained normal despite the peso’s depreciation.

Zimbabwe’s currency is still in free fall and the government has started selling gold coins to ease the depreciation. These coins will be tradeable in Zimbabwe and other countries. The purpose of the gold coins is to increase the demand of Zimbabwean dollars and reduce the desire of people exchanging currency for US dollars.

Tajikistan’s currency increased once again due to its strong relationship with the Russian ruble. Like the Belarusian ruble, the Tajik somoni increased precipitously, but has slowed with the U.S. dollar’s slow rise in the past few months due to interest rate increases.

It was announced that the Chinese yuan will be included in the basket of currencies that determine the Belarusian ruble’s value. This basket now includes the following currencies and weights: Russian ruble at 50%, the U.S. dollar at 30%, the Euro at 10%, and the yuan at 10%. Furthermore, exports to Russia reportedly increased up to 17% since the beginning of 2022, despite the sanctions placed on the country. Exports to China have also increased up to 50%.

Subscribe to our blog to stay updated on changes around the world that impact Global Mobility & compensation.

What are the most cost effective assignment types?