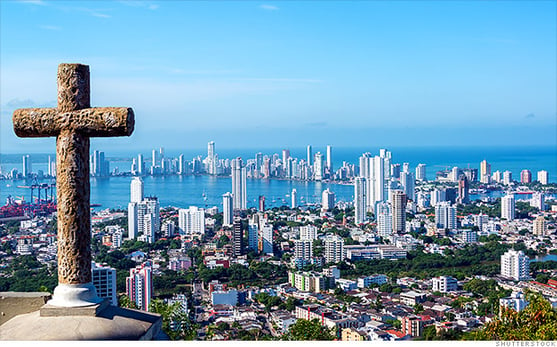 The main factors causing currency fluctuations this month are inflation forecasts, changes in domestic money supply, and the United States FED announcement. Depreciations resulted from political uncertainty, usually from a lack of confidence with the current government party. Inflation results that were worse than expected caused other currencies to depreciate. Currencies appreciated against the U.S. dollar after the United States FED announced interest rate hikes will slow down.

Many more currencies gaining value against the USD in November compared to October. 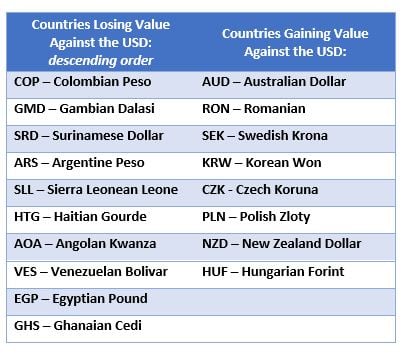 The Colombian peso continues to weaken from political uncertainty. It decreased in early November in anticipation of the FED’s interest rate announcement. President Gustavo Petro’s plan to increase taxes on oil and coal has also produced an uneasiness among investors and his land purchase program to halt all oil exploration may cause the nation to increase its debt.

Gambia had many problems this year including high inflation, rising food costs, supply chain constraints, and high unemployment. Price hikes are reportedly due to regulatory fees that have been passed onto the consumer. According to Gambian economist Mamadi Kurang, the primary reason for the dalasi’s depreciation is an imbalance between supply and demand. Demand for dalasi is exceeded by demand for U.S. dollars, driving the dalasi downwards.

The Suriname dollar depreciated due to external global factors described in last month’s blog. The most recent economic news for Suriname is the discovery of oil off the coast. Suriname’s government is looking to gather more investments to further explore and develop offshore drilling in this area. The discovery is noteworthy due to the oil’s low sulfur content making it easier to refine the oil into fuels.

Inflation continues to climb as expectations were surpassed once again. Argentina’s Minister of Economy implemented a new preferential exchange rate called the “soy dollar.” This rate is placed higher than the current rate approximately around 220 to 230 to encourage farmers to sell their soybean stock rather than storing them.

Recent economic reports regarding inflation and GDP growth caused the leone to continue to depreciate. Inflation was reported higher than expected for quarter 3. The agriculture and services sector showed a slowdown in growth, but overall GDP is projected to increase in 2022. The increase in fuel prices relative to the currency’s depreciation has also negatively affected manufacturing production.

Security and social instability remain the driving factors for the depreciation of the Haitian gourde. Several economic indicators such as unemployment, production in the commercial and textile industries, and food insecurity have all performed poorly.

Angola is expected to adhere to social pressures as inflation continues to rise. Social spending will increase and investments will increase in sectors such as agriculture. According to Fausio Mussa, the chief economist for the Standard Bank of Angola and Mozambique, the reduction of money supply is the primary reason for the kwanza’s depreciation.

Due to the government’s decreasing money supply, it has been difficult for them to intervene in the foreign exchange market. This is due to sanctions reducing the amount of money into the country. Inflation also influenced the bolivar due to the Venezuelan government and companies increasing payments to workers.

The Egyptian Central Bank allowed a devaluation causing the immediate depreciation of the Egyptian pound. Soon after, the Central Bank raised interest rates again. Additionally, the Central Bank will begin to stop the use of letters of credit. Letters of credit are letters from a bank guaranteeing that a buyer’s payment to a seller will be received timely and for the amount agreed upon. A $3 million USD IMF deal has Egypt committing to a flexible exchange rate to help with external economic stability.

The cedi continued to depreciate due to Ghana’s trade deficit. As inflation pushes upward, the cedi is expected to continue to depreciate.

The Australian dollar gained from increased interest rates and a change of Central Bank policy. The Central Bank will begin to slow the amount of interest rate increases by looking at incoming data rather than forward guidance. Wages also increased higher than expected resulting in short-term support for the AUD.

Year over year inflation reports noted a decrease, although year-end inflation forecasts are expected to show an increase. The expectation of the FED slowing the pace of interest rate hikes influenced support for other European countries including Romania.

The Swedish krona increased in value against the U.S. dollar. The mild winter so far helped reduce energy usage from a domestic and international standpoint. Externally, Russia backing out of Kherson, Ukraine, and the easing of tensions between the United States and China also contributed to the currency’s appreciation. Riksbank, the central bank of Sweden, increased its interest rates quoting the rising cost of foreign goods.

The Korean won increased based on the FED’s decision to ease the increases in interest rates while the Bank of Korea increased their interest rates and indicated that they will continue to do so until inflation is quelled. The rising difference between the rate increases for both banks will most likely continue until one of the parties alters its rate of changes.

The Czech koruna appreciated due to a change of investor attitude in anticipation of the EU and U.S. Central Bank decisions. It is expected that the rates for the United States will slow, and the koruna will regain its previous value.

The United States FED’s decision to ease up on rate increases has primarily helped the zloty regain its value. News of Poland gaining approval of 23.9 billion Euros from the European Union’s post-pandemic recovery fund has also given strength to the zloty, although the money may not be received for some time.

The Reserve Bank of New Zealand implemented their biggest interest rate hike on record of 75 basis points directly causing an appreciation of the currency.

The forint increased this month reversing its depreciation trend from news that billions of EU funding may be made available. This is dependent on whether the independence of the judiciary and anti-corruption safeguards are improved. Approval is expected to occur in the next few weeks, but payment won’t be sent until the conditions are met.

How do currency changes affect assignees?

Best practices for incorporating inflation into your salary review process