The Subway in China: The World's Largest and the World's Busiest 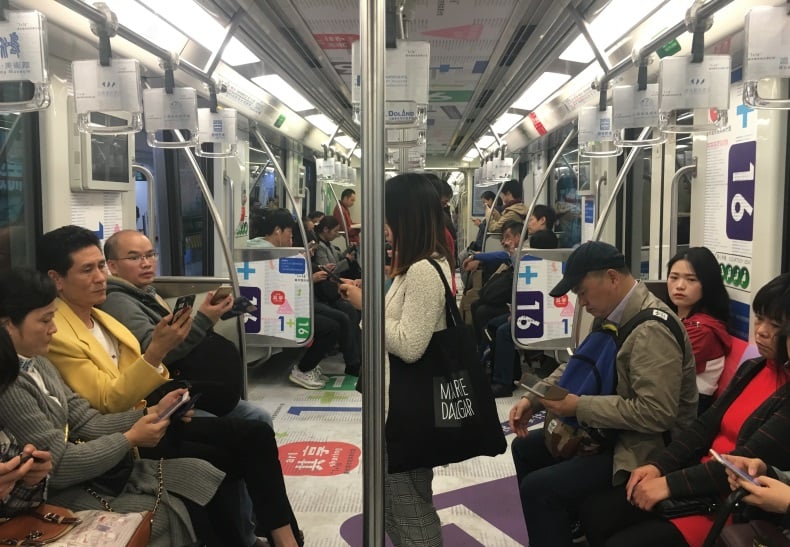 When I took the metro at 6am on a Sunday morning in Beijing, trains were running every three minutes. This past quarter I surveyed six cities in China. The largest of these cities, Beijing, Shanghai, and Chengdu, all have modern and efficient metro systems. These public transportation systems are comprehensive, providing rapid transit connections to nearly every neighborhood and destination within the city. The subway in Beijing, my first city on this survey, was the first built in China and is the world’s busiest. I found Shanghai’s metro, which is the world’s largest by length, to be similarly efficient. In Chengdu, the system is particularly modern and is much newer than the systems in Beijing and Shanghai–the first line opened in 2010, and additional lines have opened in the short years since.

Despite the efficiency and comprehensive city coverage, I saw few expatriates riding the subways in these cities. While some foreign tourists and English teachers use these transit systems, other expatriates rarely do, as confirmed by our onsite sources. Crowding and frustrations during the rush-hour commute are main deterrents. During weekdays, the Beijing and Shanghai subway systems serve over 10 million passengers, and both trains and interchange stations can be extremely congested, especially during peak hours.

The Ho Chi Minh City Metro: Will it ever be complete?

I found the roads in Chinese cities to be just as crowded as the subways, due to the simple fact of high population density, although the lax compliance with traffic laws doesn’t help. The majority of expatriates in China use a driver. Sources onsite confirmed that it’s common for full-time drivers to be provided by employers, and other expatriates simply hire a driver themselves as doing so is fairly affordable. China doesn’t recognize the International Driver’s Permit, and getting a Chinese license and registering a vehicle can be an arduous process. This, in addition to the intimidating driving culture, ensures only the bravest and most determined expatriates choose to drive here.

Has your Mobility Program considered hiring a driver for International Assignees?

Many factors, such as traffic conditions and security environment, impact transportation options for expatriates. If you’d like to learn more about expatriate transportation in China or anywhere around the globe, click below today:

Sam joined AIRINC in 2018 as a surveyor and analyst. He has conducted cost of living and housing surveys in more than 40 cities across 30+ countries. He also assists in the production of AIRINC publications. Sam received his B.A. in history from Tufts University. In addition to English, he speaks Spanish and intermediate Portuguese. Sam is based in Cambridge, MA.