News from the Road: An Expatriate Cost of Living Survey in Paramaribo, Suriname

How does this compare to other cities you have surveyed? What uniquely set this city apart from other survey locations?

It is quite different! This is the first city that I’ve surveyed that is primarily Dutch speaking, has prices in three currencies (SRD, USD, EUR), and has opposite traffic patterns from what I’m accustomed to coming from the United States. It is primarily a vacation destination, and a place where young Dutch doctors do some of their rotations. I found the culture and cuisine to be quite unique, being blended between native, Indian, Indonesian, African, and Dutch.

Getting around can be difficult if you don’t have a personal vehicle. Most people drive themselves because public transportation is limited and there are very few official taxis. I relied on the hotel taxi, which is only slightly more expensive than cabs hailed from the street. Many people walk in the city center, and some tourists rent and ride bikes. Distances are not too big of an issue, but the two main malls are about a twenty-minute drive from the city center. Public transportation can be found in the form of buses, but it is not recommended for expatriates and visitors.

As an English speaker, there were no significant language barriers or issues, as most everyone is proficient in both English and Dutch. A lot of products are imported from the US, so most have labels in English. A few items like honey and rice are imported from Turkey and China, so labels are in Turkish or Chinese, with a sticker in Dutch. Prices are clearly labeled in both Tulip’s and Choi’s, the two major supermarkets. Asking people for help in English also was not an issue.

The climate is tropical and there is a wet season. It is very hot (around 90 F/32 C everyday) and staying hydrated is important. Pollution is not a big issue when it comes to air, but the Suriname River is polluted. It is not recommended for swimming. 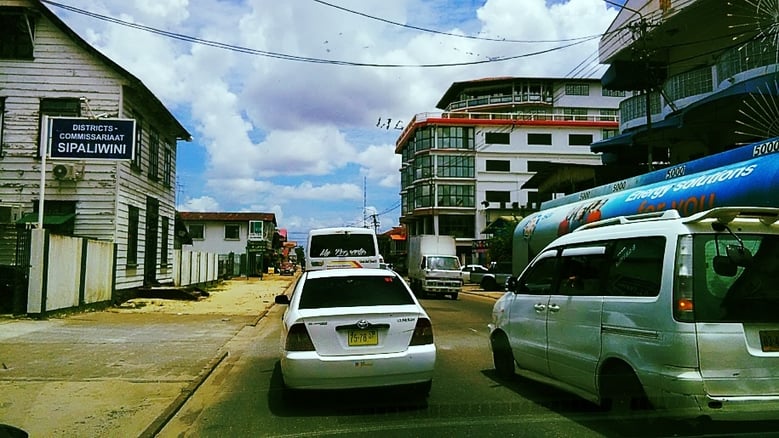 I exercised standard safety practices for traveling. I made sure not to flash money or showcase expensive items, and I stayed in well-lit, expatriate areas and neighborhoods when going out at night, as I would with any city in the world. Road conditions are not great and extra attention is advised when driving. Crossing the road might also take some adjusting depending on where you are from; the traffic patterns follow the right to left pattern – nearside traffic coming from your right as a pedestrian. Finally, staying hydrated is important as it gets quite hot. Bottled water is recommended.

Were there any challenges connected with pricing the market basket or evaluating the rental market (shortages, lack of quality goods, waiting lists for accommodations, etc.)?

There were no extra challenges connected with pricing of goods. Most of our market basket items are available, with many brands being substituted by Dutch brands. There were no shortages while on-site but I was told that meat, seafood, and rice are sometimes of low quality or are simply not available.

I really enjoyed the cuisine (nice mélange of Indian and Indonesian especially), practicing my Dutch, and getting to know about Surinamese history, a country not often highlighted in global studies. On my one day off, I did an ATV tour in the jungle and got to hug a sloth.