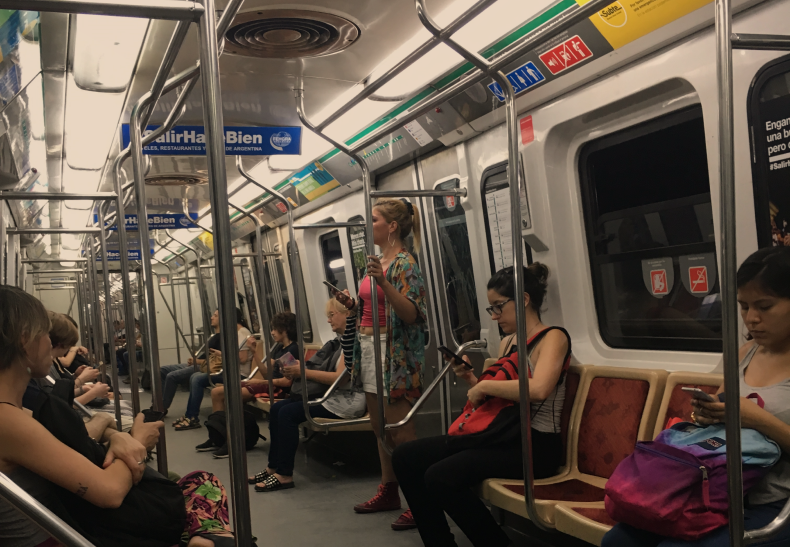 From Hong Kong to Banjul and everywhere in-between

At home in Hong Kong, getting around the city is simple due to our modern subway. When traveling for survey, I get the opportunity to experience the wide spectrum of ease and difficulty found in the world’s transportation systems, from “the Tube” and signature double-decker busses in London to poorly-maintained (and often not air-conditioned) taxis in Banjul, Gambia. While the majority of expatriates in Buenos Aires drive, there is a diverse public transit system, consisting of the Subte (subway), Metrobus (bus rapid transit), colectivos (traditional buses), and metered taxis.

I found the Subte to be a fairly modern system with a wide variety of murals and artwork, but it does not connect the entire city. Four of its six lines run from the center of the city outwards to the suburbs, including the B and D branches which run between the city and the northern suburbs, and are the most traveled lines in the system. The Metrobus system consists of buses in dedicated lanes with street-level stations, while the colectivos buses cover the rest of the city and run on the streets. During peak hours, the systems can get crowded, and like public transit around the world, it’s important to keep an eye out for pickpockets. During my survey, taxis were plentiful and easy to flag down.

While traveling the city by taxi, I could see why so many expatriates feel comfortable driving here. As a taxi driver explained to me, the majority of the city is organized as a grid, with each block approximately 100 meters long. The drivers only need to know the street and the unit number. In most cases, road signs not only include the name of the street, but also the range of building numbers, such as “Sinclair 200-299.” For people who have become accustomed the system, it’s easy to know how far away a destination is; for example, Bonpland 1300 is ten blocks, and approximately one kilometer, from Bonpland 2300. Most roads are one-way, and to me this seemed to reduce traffic congestion. Thus far in my surveys, I have not encountered another city to be built in such a systematic way.

Many factors, such as traffic conditions and security environment, impact transportation options for expatriates. If you’d like to learn more about expatriate transportation in Argentina or anywhere around the globe, click below:

Born in Malaysia and educated in Hong Kong, Amber holds a Bachelor of Accounting and Finance from the University of Hong Kong. She is fluent in English, Mandarin, Cantonese, and Bahasa Malaysia. Amber joined AIRINC in 2017 and began as a cost-of-living surveyor. With the familiarity of data collection process, she then moved to the Analysis and Delivery team to facilitate client data projects and production. In her current role as a Client Engagement Manager, she has been serving clients across APAC, and is the client engagement lead for clients in Malaysia, Japan and Korea. Prior to joining AIRINC, she worked at PwC’s China Corporate Tax, providing tax compliance and consulting service to corporates in China and Hong Kong.