Why We Decided to Become Expats: 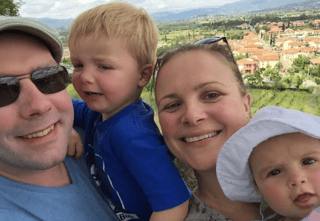 My wife Casey and I love the adventure and learning that comes with travel. Over our years together, we’d often discussed living abroad, and eventually decided that it was what we wanted for our family. Casey works in digital marketing and pursued international opportunities once we’d made the firm decision to live abroad. After receiving offers from a few companies, she accepted a position with a top London agency.

Several weeks later, we found out Casey was pregnant with Vivian, our second child. Yikes! A new country, new company, new job, and new baby: there was a lot to reevaluate before moving forward. We ultimately decided that if we didn’t take the opportunity, we might never do it. To temper the change ahead, we also decided that I would be a stay-at-home Dad.

At the time of writing this, we’re a year into Casey’s assignment on a local-plus package.

Leaving Life as We Knew It and Starting from Scratch:

Between grandparents, aunts, uncles, cousins, and friends, there was never a shortage of celebrations and get-togethers in Boston. We’re at an age where our friends are having children, so we were also enjoying frequent playdates, birthday parties, and the like. Looking back on it, I think the excitement of moving abroad peaked right before having to say goodbye. Missing several years of gatherings with family and friends is the hardest part of being an expat.

Missing several years of gatherings with family and friends is the hardest part of being an expat.

When we first arrived, we were fortunate enough to have been introduced to friends of friends who live in London. They have a young son that is the same age as our oldest, Max, who’s two-years-old. The friendship of another family from our home country was an immediate relief with so many new things in our day to day life. Being able to share common interests from holidays to sports teams added a sense of familiarity that eased our transition. 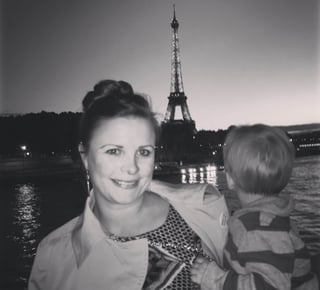 Paris, France: Casey and Max at the Eiffel Tower.

As we acclimated to our new home, we found that community activities helped forge new friendships. We enrolled in a NCT (National Childbirth Trust) course, a childbirth and parenting program. The group met once a week for six weeks, and our course consisted of seven other couples. In addition to forming new friendships, we also found great value in learning more about having a child in the NHS (National Health Service), which was different from what we experienced with the birth of Max in Boston.

Given that London is a global center for business and is a relatively short flight from Boston, we’ve enjoyed the good fortune of hosting friends and family on a monthly basis. We may be physically far from home, but these visits and modern technology have made it much easier to maintain our relationships from home and to share our life. It must have been much more challenging and isolating to be an expat before the advanced tech and social media outlets that we have today.

I’ve found that being a stay-at-home Dad is quite rare. Most people I meet assume we’re on our way to or from Nursery or that it’s ‘Daddy Day’. Nope, ‘Home-Dad’ I say proudly. I’m living the dream.

It’s certainly not the dream I envisioned when I was younger but, as a dad, it’s the dream for me. Sometimes I almost need to pinch myself as a reminder that it’s real.

And, while it’s not without the normal frustrations that come from a two-year-old who is asserting his independence or an infant who's cutting her first teeth, our time in London has been an incredibly rewarding experience.

We live in Highgate, North London, on the Eastern edge of Hampstead Heath. There are loads of parks, playgrounds, playgroups, walking trails, splash pools, and open fields in Highgate. It’s nicknamed the Nappy Valley and you can’t go for a walk without seeing young families and children in buggies.

We have breakfast with Casey before she leaves for work, then typically have a brief playtime at home before an excursion about town until naptime. Sometimes we’ll put on our wellies and splash in every puddle we can find, other times we just explore a new place, run errands, or have a picnic.

Viv is still very portable, typically sleeping in the buggy or Ergo, and Max has become a great helper whenever we go out. He recently started pulling the basket around the market and assists with adding items, though often what he picks isn’t actually from the shopping list. Once a week, we also make the trip to Central London to have a picnic lunch as a family during Casey’s lunch break. Her new job has come with more responsibility and in only a year she has continued to advance her role. I admire her drive and recognize that her time outside of work is precious. Since moving, I’ve taken on primary responsibility for shopping, cooking, and cleaning, but we still share the most dreadful chore of all: laundry.

Taking a step back from my own career was difficult, as I’m sure it is for all parents who make a similar choice regardless of gender. Early on there were several occasions where I questioned our choices and felt like I wasn’t contributing enough. Casey graciously reminded me in those times of self doubt that we are both relying on each other more than ever and contributing to our family in equal, but different ways. I’ve learned to have more confidence in what I’m doing and to also have confidence that when circumstances change in the future we’ll be able to adapt, just as we have now.

Early on there were several occasions where I questioned our choices and felt like I wasn’t contributing enough.

After the first frenzied weeks of transition, we realized that we needed to dedicate time to our own relationship, too, by enjoying our new city child-free on occasion. We joined a babysitting service and go on at least one date a month. We’ve also had the good fortune of hosting our parents, who were more than eager to watch their grandchildren. 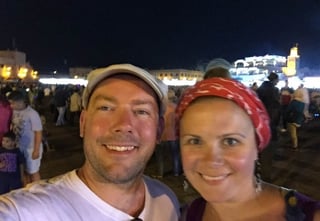 Despite sharing English as a common language, we still had to adjust to cultural norms and vocabulary differences. For starters, the English take their queues very seriously. It only took a few embarrassing tries at the market and café to figure out that I was lining up on the wrong side. Of course, though, I got so used to this that on our first home leave I inadvertently cut everyone in line a few times by queuing on the left.

People in our new home city have shown our children a warm and generous reception. Things strangers have given Max while out and about include: kit-kat bars, gingerbread men, gummi bears, lolli-pops, a neon bracelet, and a therapeutic quality gemstone. He’s a charming boy with a nice smile, but this only happens for him in London.

Another major difference is the daylight. London is on the 51st parallel and there are fewer than eight hours of daylight in the depths of winter, but almost seventeen hours of daylight at the peak of summer. This has a noticeable impact on people. We settled into our long-term let in mid-October. I always smile and say hello to neighbors, but I didn’t have an actual conversation with any of them until springtime. At first I thought it was me, but our friends reassured me that when the spring comes everything changes. They were right. Vitamin D is a magical thing.

I always smile and say hello to neighbors, but I didn’t have an actual conversation with any of them until springtime. At first I thought it was me, but our friends reassured me that when the spring comes everything changes. They were right. Vitamin D is a magical thing.

We’ve had to learn new vocabulary, sometimes the hard way: pants are underwear, trousers are pants, diapers are nappies, strollers are buggies or prams, pacifiers are dummies, ‘to go’ is take-away, it’s not perfect – it’s bang on, it’s not customized – it’s bespoke, sirloin is a rump steak, cilantro is coriander, it’s not mm/dd/yy – it’s dd/mm/yy, and most times are quoted in a twenty-four hour format.

How I’ve Grown and Changed:

Living in a foreign country and getting outside of my comfort zone has made me grow more than any other experience in my life. Before we moved, I was a much more anxious and guarded person. My closest friends and family probably regarded me as an extrovert, but I was quite shy and seldom let those outside of my inner circle really get to know me. Facing new and unknown situations has torn down many of those barriers. I sincerely enjoy getting to know people and approach it with a new sense of confidence and humility. I guess part of this comes from experiences like taking a screaming two-year-old, who missed his nap and lost his lovey, through a long airport security line.

It’s been an incredible first year. We look forward to many more.